In Eastern Nepal, agriculture is a way of life. After subsistence farming for generations in the steep Himalayan middle hills, connection to the land is deeply woven into the cultural heritage of dZi’s partner communities. Time, as well as village celebrations, revolve around the growing seasons. However, farmers often struggle to make ends meet. From few local markets to poor irrigation infrastructure, surviving off subsistence farming can be tenuous. But in Eastern Nepal, dZi’s Agriculture Program is writing a new narrative. 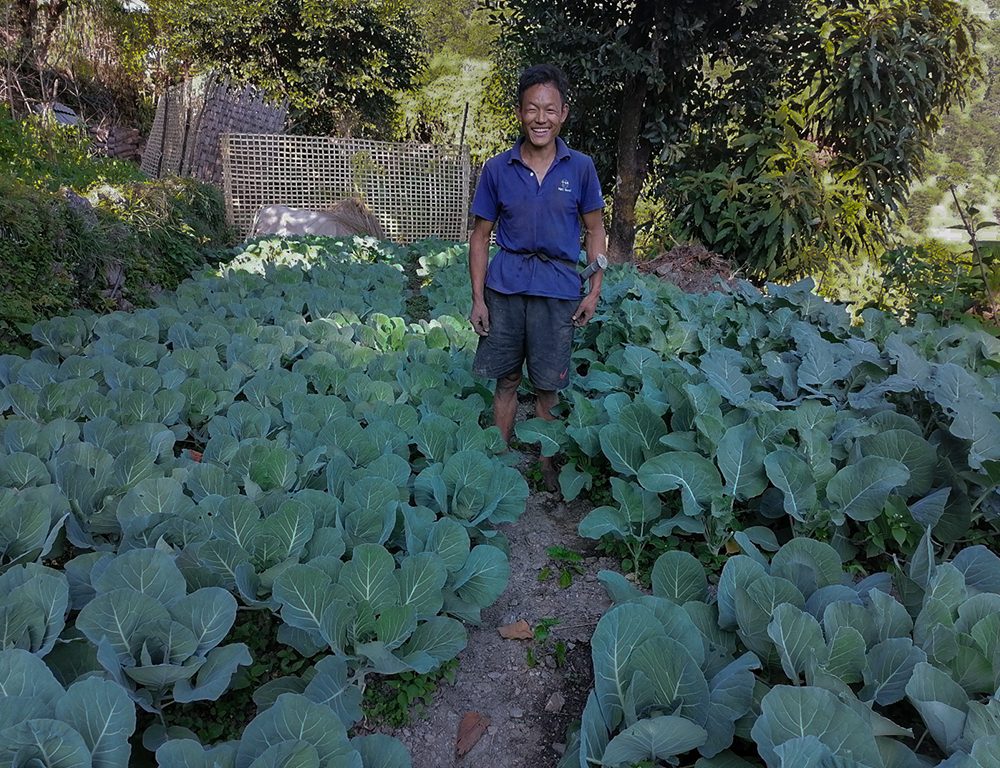 Chandramani Rai is a dedicated and hardworking farmer from the village of Chhekma in the community of Bung. A life-long farmer, his crops support his four daughters, son, wife, and aunt.

Now 38 years old, Chandramani had an extremely challenging childhood. He was in tears as he recalled his early years. “My father passed away the very year I was born. My mother also died after a year. A year after my birth, I lost both of my parents. In the absence of my father and mother, my grandfather cared for me. At that time, he would get 300 NPR per month (less than $10 in today’s economy) as a senior citizen’s government subsidy, which was almost all we had to make our living. We would cover the rest of our financial needs by selling pigs and chickens.”

Chandramani moved in with his aunt after his grandfather passed away. A bright and motivated student, he began attending his local school. He loved investing in his education, but like many children, he had to help his family at home and could only attend school part-time. Nevertheless, made every effort to complete the third grade; after that, he had to drop out since he was too busy with work at home. He received some masonry training, an opportunity for him to explore a new trade, but most of his time was dedicated to perfecting his agricultural skills. 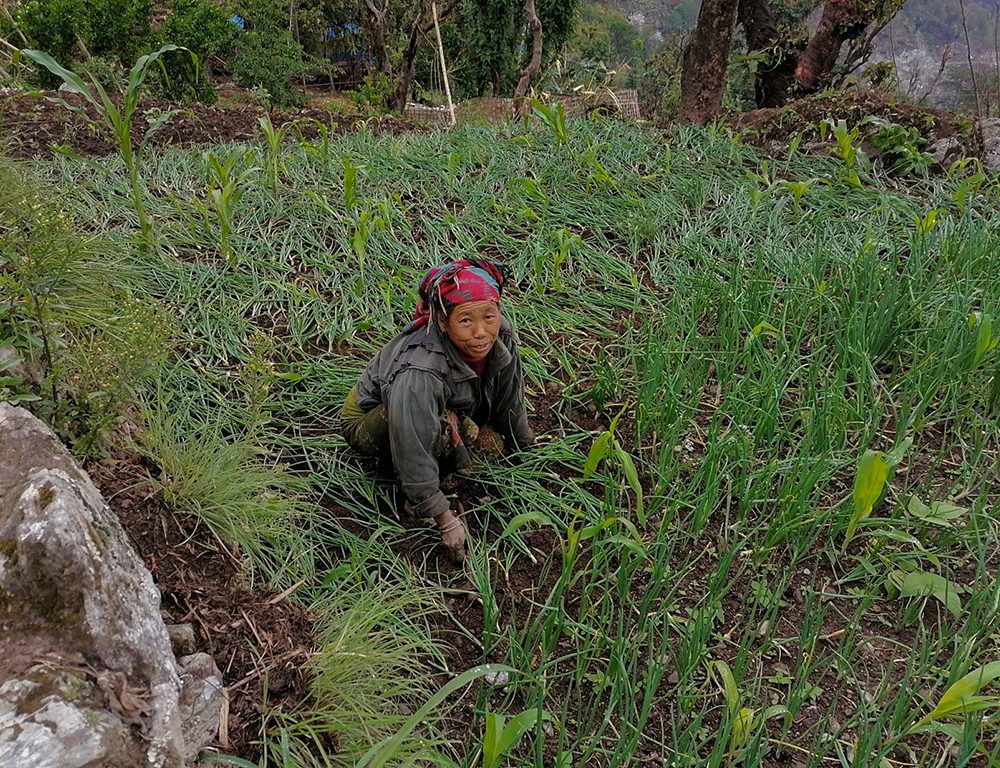 Chandramani's aunt in their kitchen garden

As Chandramani got older, he began to have access to more opportunities. He shared, “I got married when I was 24 years old. dZi had started working in my neighboring village at that time. It was then that I learned about dZi's outstanding work. Later, dZi partnered with our community too. Our village has benefited greatly from dZi's all-encompassing, partnership-based approach to community development.”

Chandramani has been a member of his local dZi Farmers’ Group since 2019. Despite being involved in agriculture his whole life, he never had access to the variety of vegetable crops and agricultural practices that dZi introduced. dZi distributed many types of seasonal fruit saplings and vegetable seedlings free of charge throughout the community – a huge help for members of dZi’s agriculture program. Staff provided extensive training on cultivating these new crops and checked in regularly to make sure farmers had the support they need. Alongside lentils, potatoes, and other staples, farmers are now also cultivating turmeric, kiwis, and other cash crops. 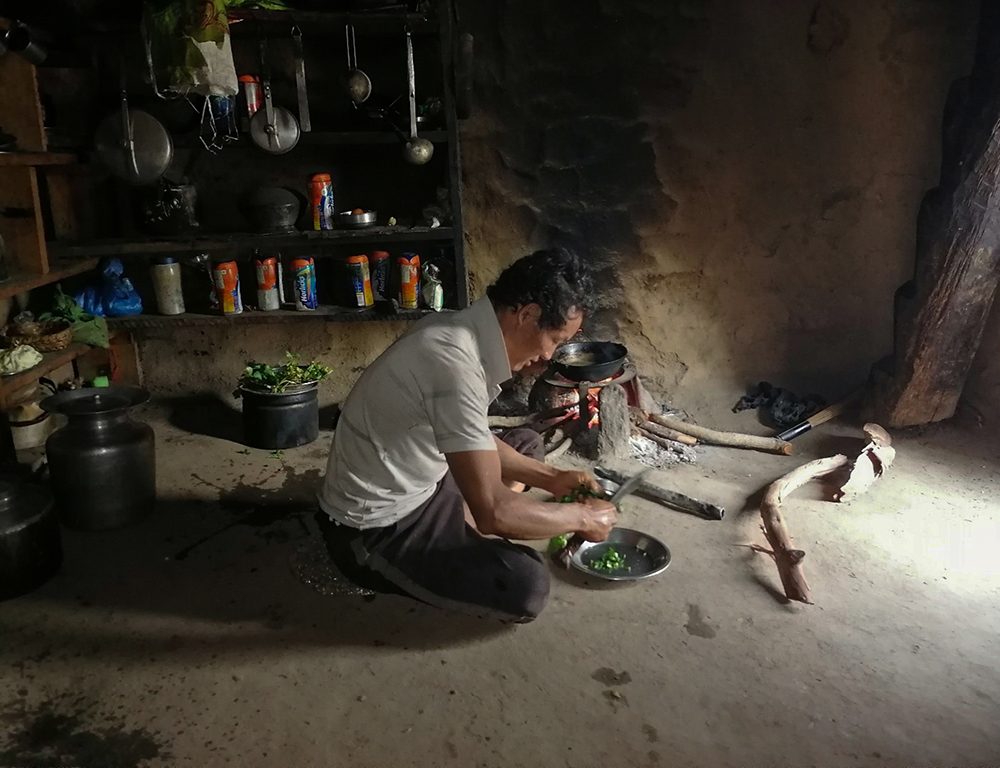 Chandramani preparing food that he grew in his kitchen

As part of the Farmers’ Group, members have established their own savings fund where they deposit half of the price of the seedlings and saplings that dZi provided to them. The fund builds economic resilience and access to capital among farmers and has reduced local interest rates by nearly 50%. This economic support is paired with organic agricultural trainings designed to improve yields.

In the four years of dZi’s partnership with Bung, Chandramani has already attended more than ten trainings and learned valuable skills and farming techniques. Chandramani is committed to sharing what he has learned with his family members. He says, “My daughters, my aunt, and my wife will also learn about the various new techniques in farming if I share what I have learned with them. My family provides me with unwavering support, which motivates me to work even better. Without family support, there is little we can do. I am satisfied with my work and the support from my family members.”

Chandramani and his family appreciate that they now eat healthy vegetables every day and have access to fresh vegetables year-round. In the past, their nutritious food consisted of mustard greens, radish, and kinema – an indigenous food made from fermented soybean. These days, they’re thankful they have even more nutritious options to choose from.

Chandramani among his peas

Chandramani showing off his cabbages

But by far the greatest change the Farmers’ Group has brought to Chandramani’s life is increased income. Prior to dZi's Agriculture Program, the village’s farmers would seldom sell their harvests – only cultivating what they could consume. But with dZi’s support, many of the farmers in his group have begun to sell their produce at the local market. Aided by dZi’s training on marketing produce, Chandramani is now earning NRS 97,000 ($770 USD) annually by selling pigs and vegetables. He is able to pay for his children's schooling from this agricultural income and had enough left over to purchase a plot of land in Bung’s market center.

Chandramani isn’t stopping there. This year, he intends to start an orange farm on two ropanis (a measurement of land that equals 0.25 acre) and intersperse his trees with other crops to maximize his yield. He aspires to make enough money from his work in agriculture to provide his kids with an education that he couldn’t have. He is grateful that dZi has provided the skills, opportunity, and infrastructure to allow his family to flourish.

All photos were taken by dZi Agriculture Technician Ishwor Basnet.