Growing up in a small village in Khotang District, Nepal, Dillu Khatri was always interested in agriculture. In his rural community, Dillu’s education was split between school and his family farm. He would study hard in the classroom and return home to watch how his parents cultivated their crops and tended the land throughout the year. In Eastern Nepal, Dillu’s childhood wasn’t abnormal. Many families in the region rely on farming to provide food for their families and as a source of added income. Yet despite the farming wisdom that Dillu’s family has passed down through multiple generations, there are many advancements in agricultural technology and efficiency that haven’t been available to rural communities. From new cultivation techniques to more efficient preservation and distribution practices, residents lacked the resources to make the most of their hard-earned harvests.

But things are changing in Eastern Nepal. To help our partner communities build healthier and more prosperous futures, dZi has introduced new trainings and infrastructure to improve harvests and boost incomes. And now with Dillu’s help, these changes are having a significant impact. 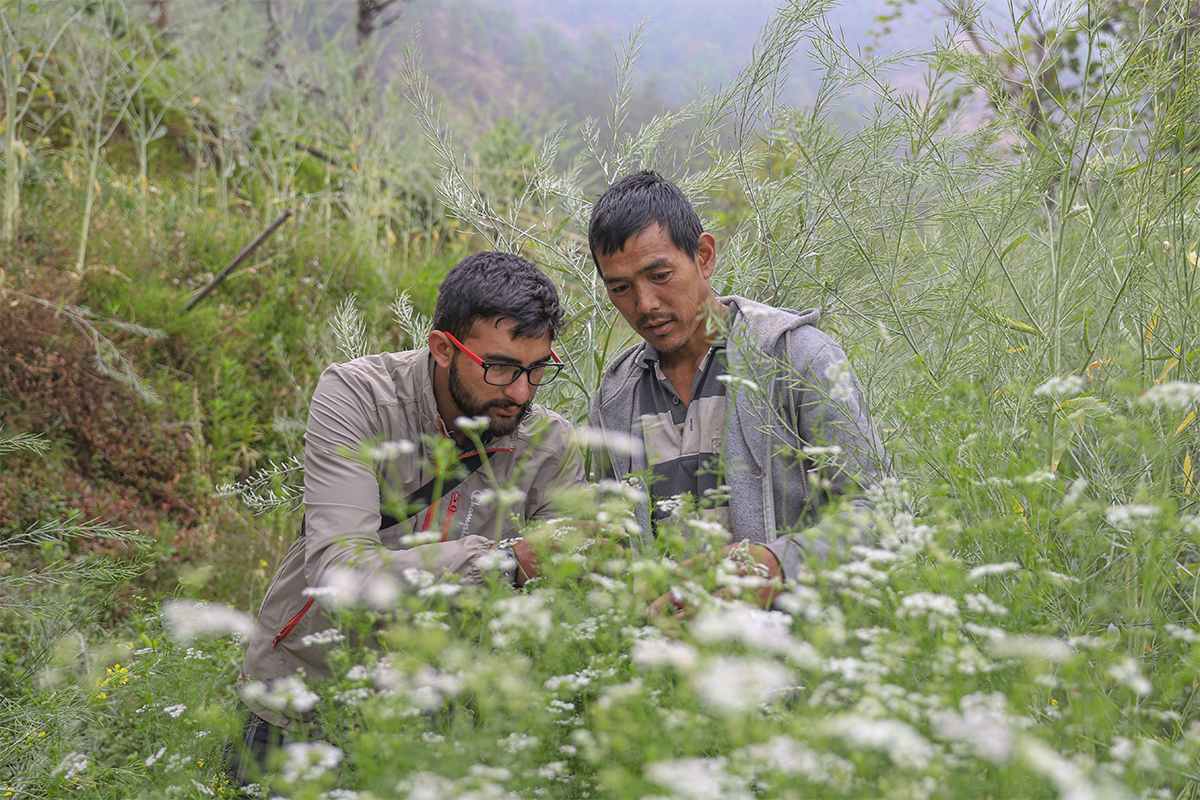 Dillu showing a local farmer how to check for pests

After graduating from secondary school, Dillu knew he wanted to pursue a career in agriculture. In a country where most people who live in rural areas are farmers, he knew that if younger farmers adopted new techniques and agricultural methods, it could have a transformational effect. Many rural residents are subsistence farmers and mostly eat food they grow themselves. The lentils, millet, and vegetables they cultivate sustain them throughout the year, but when drought or crop failures strike a region, food security can become a challenge. Dillu’s agricultural training had taught him how to help farmers improve crop yields, organize their fields more efficiently, and preserve more of their harvest – but he didn’t know how to translate his education into action. 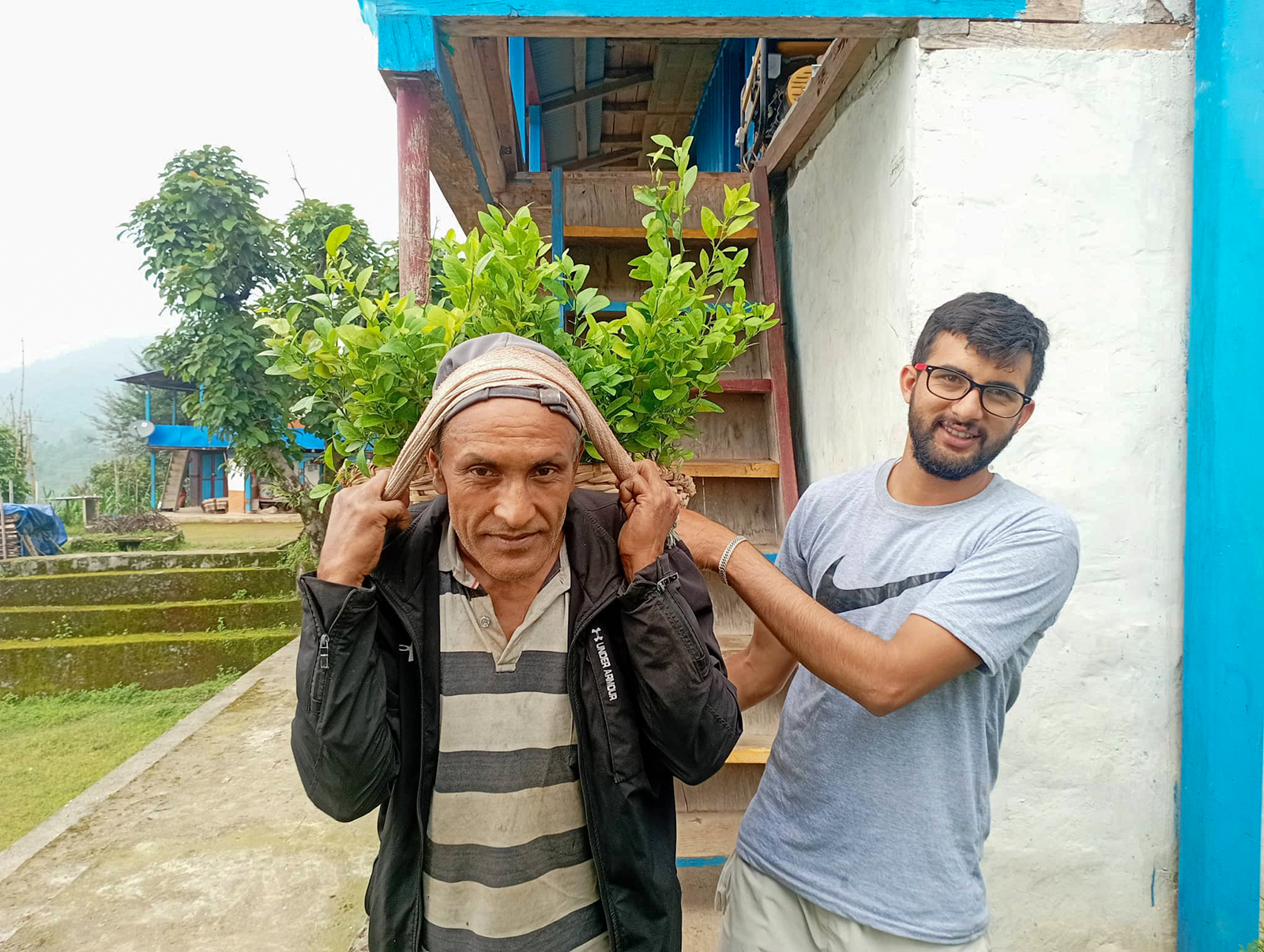 Four years ago, Dillu heard a radio advertisement for a job with the dZi Foundation’s agriculture program. The opportunity to help local farmers strengthen food security and generate more income was too much to pass up. Dillu was hired as an Agricultural Technician and has been stationed in our partner communities of Rakha, Sungdel, and Dipsung ever since. Along with our other agriculture staff, he has been working with farmers to grow more nutritious produce, promote organic and cash crop farming, form groups where farmers can share ideas and resources, facilitate the marketing of agricultural products, and connect farmers with government subsidies and support.

While Dillu’s expertise is essential to the success of rural farmers, it’s our partner communities’ leadership that contributes to their collective prosperity. Like all dZi projects, the goals and vision come from community discussions. If a community needs a new irrigation system, dZi works with residents to create a plan, construct the system, and ensure that it can easily be maintained and repaired. And if a community’s crops are being eaten by an insect infestation, dZi staff strategize with farmers to create an organic pesticide that can be made from local ingredients. It’s this community leadership and ownership that ensure the continuation of projects long after dZi has left.

dZi’s partner farmers have been encouraged to cultivate a diverse mix of high-value  ‘cash crops’ in addition to their traditional staples. Growing turmeric or kiwis can bring in many times more income than the cereal grains and vegetables that are commonly sold. However, dependency on rainfall for irrigation, lack of proper produce storage facilities, and harvests that are too small to interest large-quantity buyers can make it difficult for farmers to cash in on their harvest. To help remedy the problem, dZi introduced the ‘One Group, One Crop’ program. Originating in Japan in the 1980’s, this system asks farmers in a specific area to plant a common cash crop to make it easier for the market middlemen to purchase crops in large quantities from a single village.

A turmeric process machine in the village of Rakha, Khotang District

In one such group, 17 farmers in Dillu’s working area of Rakha, Khotang District have grown turmeric. This is their fifth season working together to cultivate the crop and so far it has been a huge success. “We would not earn anything previously from agriculture. Now after planting turmeric in coordination with other farmers near my house, we earn more than 50,000 rupees ($395 USD) a year”, says Sungdelni Rai. “We used to have barren terrain even near our home. After becoming a member of dZi’s agriculture group, we have all our lands covered with green thriving crops.” Two turmeric processing machines were bought so the farmers in the neighborhood would be able to process raw turmeric and preserve it for sale. Other groups have chosen crops like ginger and garlic for collective farming – decisions based on their market value and their lower susceptibility to insects and pests. Together, residents are strengthening their farming capacity and revitalizing the local economy.

Dillu has also persuaded his relatives to organize a One Group One Crop system in his home village of Halesi – a village in Khotang close to dZi’s working area. “These are the perks of working in this sector,” Dillu says. “Studying and working in agriculture entails tackling some of the world’s most difficult challenges, such as food security, climate change, and overpopulation. Additionally, it offers the chance to learn in-demand skills, interact directly with nature and technology, and contribute directly to the development of a community, which is a fulfilling pursuit.” Alongside his work with dZi’s partner communities, Dillu owns a small farm near his home. His land is covered in kiwis, lemons, Japanese pears, plums, and bananas. Family members look after the farm while he is away, but someday Dillu wants to make his farm a full-time business. Just like the farmers in dZi’s partner communities, Dillu is taking small steps toward the future he loves.

Lemons picked up at Dillu's Farm