“When my neighbors come to watch TV, they gain knowledge and fun from it. I gain fertilizer for my crop!”

The first time Dhiraj Rai, 28, from Bung tried out urine as fertilizer, he noticed right away just how good it was for the plants. He had applied it to some of his vegetables, fruit trees and to cardamom plants as trial. He saw that they were all much better compared to when he just applied regular farm fertilizer. This convinced him of just how good urine is. Now not only he uses urine from his toilet as regular fertilizer in most of his plants, he has also started using it to make bio-pesticides and insecticides.

Dhiraj is a leader farmer in his community who returned back to the village after completing his studies.  He has a Bachelor’s degree in Science. After his studies, he had worked as a teacher in Jiko Corner High School of Faplu for 3 years. While he was shaping young minds through his teaching, he says that he began to feel like ‘everybody can preach and say things but only few can practice what they preach’. He begun to form ideas about doing something himself to inspire others. At the same time, he saw how so many young people like him left their villages to go abroad as migrant labors. He also really wanted to inspire his fellow villagers to stay in the village and do something productive. And he says he realized he needed to go back home and set an example.

So he left the teaching job and came back to his village in Saddi, Bung. He started an integrated agriculture and goat rearing farm in his home. Knowing the importance of team work, he also helped form the Dajubhai Mishrit Farmer’s Group in which he is the chairperson now. Dhiraj is most busy tending to his flock of goats, but he is also equally dedicated to growing vegetables, a slew of fruits and cardamom. From his integrated livestock and farming, he now earns around Nrs. 6 lakhs (~USD 6,000) annually.

It was Dhiraj’s curious nature that led him to discover the technology of using human urine as fertilizer. While visiting neigbouring communities of Chheskam and Sotang, he often heard about urine fertilizer doing wonders in farming. When Chheskam was declared the first eco-san village in the entire nation, he then proactively sought out what eco-san village meant. He learnt that eco-san village is one where every house has an eco-san toilet. Such toilets collect urine separately and this collected urine when used in an appropriate way works as an excellent fertilizer for plants. Urine contains nitrogen which is required the most by plants for growth. He also learnt that it is not only urine of livestock that can be used in farming but that human urine is an even better fertilizer. He then started to explore about alternative methods to collect human urine besides eco-san toilets as he already had a water-seal toilet at his home. He met  Jitna Janam Rai, our Solukhumbu Program Coordinator, who has gained much expertise on eco-san technology after years of his work on several toilet projects. Jitna demonstrated to Dhiraj how it is possible to collect urine by using a simple drum and funnel setup even if one did not have a special eco-san toilet. After this, Dhiraj promptly bought drum and funnel. He built another latrine under the stairs of his house just to collect urine.

Every night, many young people from around the neighborhood come to his home to watch entertainment and other awareness related programs on TV. He asks them and other guests to use the ‘urine collecting’ latrine.  Even for those who feel discomforted to use this, he encourages and tells them about the importance of urine. He jokingly says that it is a fruitful business of exchange between him and his neighbors. He shows them fun and useful programs in TV while his neighbors supply him with urine which is important for his farm.

Since using urine has proven so useful, he has now started to collect urine from his goats as well. He now regularly uses urine in many of his plants. After urine treatment, his Japanese Unsu oranges have produced healthy ripe fruits on time. His cardamom seeds have produced many more sprouts which means increased number of cardamom plants he can sell. He estimates that next year he will make around Nrs. 1.1 million(~USD11,000) just from the cardamom plants which has been doing so much better after urine use.

Indeed Dhiraj has practiced rather than preaching and shown us all the immense possibility of agriculture business in rural Nepal. Though Dhiraj is not directly involved with any of our agriculture programs, he was inspired to start using urine after hearing about success of eco-san toilets that we introduced in Sotang in 2012 and in Chheskam in 2014. Dhiraj has shown way for many youths in the area just what can be achieved while still living in village. 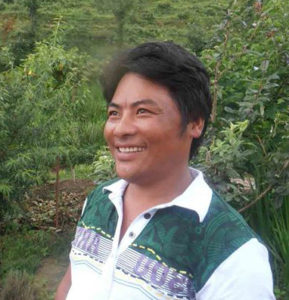